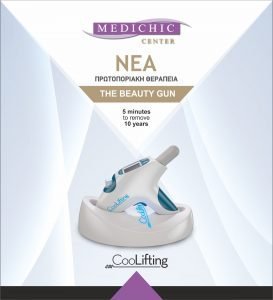 It is designed to add a clarifying effect to the anti-aging effect and is used to unify the skin tones in those cases with pigmentation differences.

Coolifting grows up. Coolifting CoolClear has arrived as a new vial to complement the system that revolutionizes the aesthetics market.

Coolifting CoolClear is designed to add a clarifying effect to the anti-aging effect. It is used to unify the skin tones in those cases with pigmentation differences. It requires a continuous protocol for 6-8 sessions (1-2 per week) and afterwards a maintenance protocol every 15-30 days to achieve an equalization and balance of the skin tones and, thus, reduces spots. This results are added to the original antiaging effect of Coolifting.

The composition maintains the same base as Coolifting, but it adds Kojic Acid, Vitamin C (Ascorbyl glucoside) and Glycolic Acid. As it is a non invasive treatment, the care and the counter indications of Coolifting, resides possible allergies to some of the new elements, something that very seldom occurs.

In that way, Coolifting continues its expansion of the concept and the territory, as it is already present in 55 countries all over the world.